2016 Highway Deaths Greater Than in Years Past 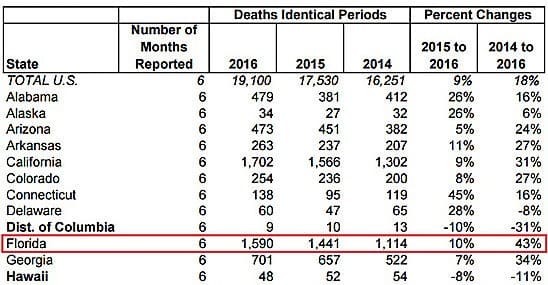 The National Safety Council (NSC) reports that a total of 19,100 deaths occurred on U.S. highways in the first six months of 2016 representing an overall increase of 18% from 2015. Nationwide, the estimated annual mileage death rate was 1.3 deaths per 100 million vehicle miles driven. It is possible that 2016 could break 40,000 annual deaths for the first time in 9 years. The NSC comments that the increase in fatalities likely reflects the impact of low fuel prices, however, cautioned that a correlation to a stronger economy may make it harder to isolate the precise impact of lower gas prices. Further, there were 2,196,000 medically consulted injuries in the first six months of 2016. There is no prior year comparison on medically consulted injuries because of changes in methodology. Overall, the national cost of motor vehicle deaths in the first half of 2016 was $205.5 billion.

The second year of lower gas prices appears to have caused an increase in miles driven which is causing an increase in the number of fatal accidents on the roadway. The current national average of 1.3 deaths per 100 million vehicle miles driven is only slightly higher than the previous average of 1.2 deaths per 100 million vehicle miles driven. This data suggests that the overall risk of death is roughly the same but that the number of miles driven must have increased significantly. While the economy in general may have something to do with that, lower gas prices clearly give a driver less to think about when it comes to getting in the car and going somewhere. There may even be an attitude that car trips should be taken now while gas prices are still low rather than put off into the future where gas prices may be higher.