Common Neck and Back Injuries

Some of the more significant neck and back injuries include positive findings on an MRI or CT for a bulging disc or herniated disc (also sometimes referred to as a ruptured disc, collapsed disc, torn disc, or slipped disc).  It is not uncommon for a bulging or herniated spinal disc to require injections or surgery to reduce pain to a level where the patient can function on a daily basis.

The term “herniated” disc actually refers to a range of spinal disc injuries but is most commonly used to mean a disc “extrusion.”  A disc extrusion is a a spinal disc that has ruptured.  As the disc ruptured, the membrane that holds the disc’s fluid in (the part that does the cushioning work) breaks and the internal disc fluid escapes.

When this happens, the disc has nothing to hold it up against the weight of the body and it collapses (axial pain).  This results in pressure on the spinal cord, usually causing very severe pain, and if left untreated can lead to paralysis.  With modern medicine, neurosurgeons can perform a variety of surgeries to avoid paralysis and the loss of major bodily functions as a result of a spinal cord injury.

Secondly, the escaped disc material can also pinch or impinge upon a nerve root, resulting in radicular or sciatic pain.  Surgery can be done by neurosurgeons to relieve the pressure on these nerve roots to allow the patient to return to a tolerable degree of pain for living.

Symptoms of a herniated disc include:

These symptoms can have a very significant impact on the quality of life for the person who suffers from them.  A patient with a herniated disc will likely experience pain upon sitting, standing, walking, and a number of activities of daily living.  While it may not seem compelling to see these words written (as these diagnoses are quite common), the focus in a personal injury or car accident case should be that this degree of pain and discomfort would not be suffered or endured without someone else’s negligence or failure to do something.

Medical bills, time off from work, and pain are compensable under the law when the injury is something that was not supposed to happen. 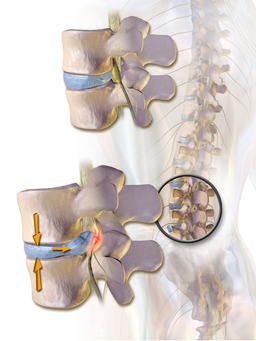 A bulging disc may be called a “herniation” by some radiologists in referenced to a personal injury, however, the more descriptive medical term is disc “protrusion.”  A spinal disc that is protruding, or bulging out, from its normal space has the potential to put pressure on nerve root endings and on the spinal cord itself in severe cases.

A protruding disc can be just as painful as a herniated or extruded disc because it can exert the same pressure on the neurological pathways (nerve roots) of the spine.

To the person who suffers the pain of these injuries, there is no discernible difference between a herniated disc or a bulging disc.  The symptoms are the same as listed above.

Surgery For A Herniated Or Bulging Disc

There are two surgeries that are performed if disc pain is the cause of the patient’s pain.  In a discectomy, the herniated, inflamed, or damaged part of the disc is removed.  This may go a long way in reducing the level of pain.

However, if there is not enough stability left, then a fusion is required.  In a spinal fusion, the inflamed disc is removed and replaced with a synthetic disc while metal hardware is used to mechanically stabilize the joint (aka “fuse” the two vertebrae into one).  A fusion will normally result in permanently limited motion in turning and bending.

The costs for these procedures is many thousands of dollars without insurance.  These procedures are very expensive when the patient does not have health coverage and must rely on settlement money to pay for them.  Medicare, Medicaid, and health insurance will all cover these procedures for several thousand dollars each in reimbursement but only after the patient has exhausted conservative therapies such as physical therapy, chiropractic adjustments, and cortisone injections.

Complications From Neck Or Back Surgery

Neck and back surgery, despite advances in medical technology, are not without their risks.  Aside from general risks of surgery and anesthesia (such as infection, bleeding, and blood clots), having surgery on your spine carries a risk that the procedure itself is not successful (failed back surgery) or that the repair contributes or causes additional injury (such as adjacent segment disease after a fusion).

Regardless of the reason, complications as a result of a failed medical procedure are considered a damage that you can claim under Florida law.

If you have a pre-existing spinal condition as many people do, you are still entitled to damages after an accident or an injury.  As the body ages, the body degenerates naturally resulting in common pre-existing conditions such as degenerative disc disease (DDD), degenerative joint disease (DJD), spondylosis (aka arthritis), osteophytes, or disc dessication (disc dehydration).

While these conditions are not caused by an accident or an injury, they make a person more susceptible to injury and, when an injury happens, it is more severe than without the condition.  Most people will begin having detectable degeneration in their joint starting in their 30’s and it continues with age.  This is also why people in their 50’s and 60’s seem to get injured more often from accidents where there might not have been an injury to someone who is younger. 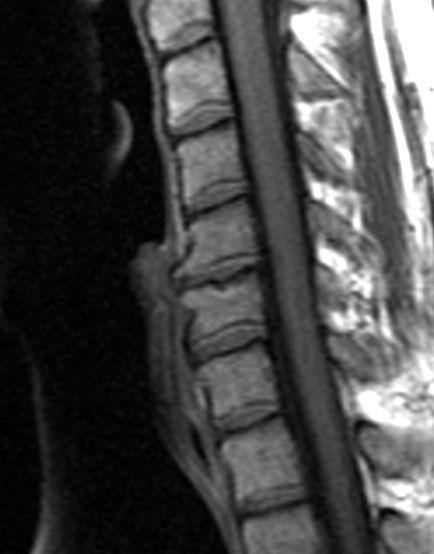 Florida has a specific standard jury instruction on aggravation of pre-existing conditions.  I have pasted the instruction below:

If you find that the Defendant caused a bodily injury, and that the injury resulted in an aggravation of an existing disease or physical defect, you should attempt to determine what portion of the Plaintiff’s condition resulted from the aggravation.  If you can make that determination, then you should award only those damages resulting from the aggravation.  However, if you cannot make that determination, or if it cannot be said that the condition would have existed apart from the injury, then you should award damages for the entire condition suffered by the Plaintiff.

The most important part of this instruction is the part that if the jury can’t apportion between what was pre-existing and what was caused by the accident, then the jury is supposed to award damages for the entire condition.

A common tactic for the insurance company is to try to make the injured person look like a liar about their pre-existing condition.  This is something that you will need to be very careful about in your case.

When you engage legal counsel to help you with a claim and you have any of those words described above on your MRI report, you will need to think about any times in your past where you may have sought medical treatment, even temporary relief, because the insurance company is sure to find the record when they subpoena your records.  Oftentimes, you will give a deposition before the insurance company subpoenas your records.  You should also be careful about what you post on social media after you  have sustained an injury because they will look to see if there is anything they can find to use against you.

Call A Lakeland Personal Injury Attorney About Your Injury

If you have been injured in an accident or suffered an injury that was due to someone else’s carelessness, you are likely to find yourself as the plaintiff in a personal injury case against an insurance company that wants to raise doubts as to whether the accident caused your injury.  For help with your case, you should call a Lakeland personal injury attorney to discuss your injury, how it happened, and what can be done about it.

We serve clients with neck and back injuries in Polk County including Lakeland, Winter Haven, Bartow, and Haines City, Florida.

In the case of Ronnie Rondell v. Daniel Romano, et al, Case Number 2D20-2840 (Fla. 2d DCA January 5, 2022), Florida’s Second DCA held that a car wrecked before its actual sale to a new potential owner did not implicate the new owner under the dangerous instrumentality...

Plaintiff Referrals Are Not Discoverable

Defendant’s Death Does Not Make A Legal Nullity

In the case of Linda Friedel v. Elizabeth Edwards, Case Number 2D20-2233 (Fla. 2d DCA September 29, 2021), Florida’s Second DCA held that a lawsuit against the defendant was not a legal nullity where the defendant passed away shortly before the lawsuit was filed. Relevant...

In the case of Estate of Sweeney v. Gloria Washington, Case Numbers 2D20-1848 and 2D20-2520 (Fla. 2d DCA September 3, 2021), Florida’s Second DCA held that calculations for the “net judgment” on a proposal for settlement only includes costs that would have been...